Nicole Zwiercan wears many hats as well as a brand new crown. Getting her pageant start only after becoming a “Mrs,” Nicole has seen first-hand the positive impact pageantry has had in her life personally and professionally, but also globally in communities around the world.

Nicole currently serves on the Board of Trustees for her hometown, the Village of Homer Glen. Most recently, she was honored to have been named the Illinois State Senate Press Secretary. These two positions have perfectly situated her at the table with those who influence law and policy, granting her the unique opportunity to have influence both locally and beyond. With a background in the Studio Arts, dance, dentistry, and the media field, Nicole has a diverse scope of experiences and skill sets, of all of which she feels have prepared her to be her most impactful as a title holder, spokesperson, advocate, and community leader.

The most profound events in Nicole’s life have been giving birth to her beautiful children. Nicole is the mother of two, Cristiano (7) and Ashlynn (4) as well as the wife of Dr. Christopher Zwiercan. Their lives were forever changed when they received their daughter Ashlynn’s Quadriplegic Cerebral Palsy diagnosis. Since then, the Zwiercan family has made the decision to proudly advocate for community inclusivity and accessibility, together. Nicole has dedicated her life’s work to her passion of inspiring a more kind and inclusive world working with foundations such as Special Olympics, and The Center for Independence Through Conductive Education.

Nicole is the first chairperson of the Ability Awareness Committee, a municipal organization that advocates for disabled individuals. They host monthly events for the Village that range from educational roundtable discussions to free sign-language classes. She is also a co-chair of the parks committee which has allowed her to have inclusive and accessible playgrounds built in her community. She is currently working with people from other regions across the nation to do the same. Nicole is responsible for the first GoTo Inclusive shopping cart in the Midwest, an initiative she is currently taking globally.

Nicole was named Mrs. Illinois in June of 2022 for the Mrs. America system, and then went on to win the title of Mrs. America in August. She looks forward to partnering with them this year to not only continue inspiring community inclusivity, but also to work with the Mrs. America national platform the Victoria’s Voice Foundation to prevent drug addiction and save lives. Nicole would also like to help bridge the gaps in the available resources for disabled individuals. Unfortunately the disabled community is not immune to drug addiction. In fact, new evidence shows that people with disabilities are more likely, and at a higher risk, than the general population to misuse opioids and develop drug addictions. Sadly, they are also much less likely to receive treatment due to the difficulties of access to care.

In 2016, Nicole won the title of Mrs. Illinois International, and in 2018, went on to win the title of Mrs. USA Universe. Nicole was chosen to represent the United States of America in Cebu, Philippines at the 12th Annual Mrs. Universe Pageant where she placed First Runner Up out of 88 contestants from all over the world. She also was deeply honored to win the 2018 Mrs. Universe Humanitarian Award for her work within her community.

Nicole has an extensive professional performance and dance background having danced with the AFL’s Chicago Rush and the NBA’s Chicago Bulls from 2001-2010.  Through those experiences, she’s become comfortable serving as a spokesperson and ambassador for many international companies. She is a proud graduate of The School of the Art Institute of Chicago, earning a Bachelor’s degree in Studio Fine Arts and Art History. In addition, Nicole has earned a degree in Science and Dental Hygiene from Kennedy King & University of Illinois at Chicago: College of Dentistry.

Most recently, Nicole was included on the 2020 list for “Top 15 Most Influential Women in Pageantry.” She also was named one of Chicago’s “Most Inspiring People” by Voyage Chicago Magazine and this past fall, Nicole was chosen to speak on the Lucy Hobbs Project “Healthy Me” Panel.

Please feel free to contact Nicole for more information on her community initiatives and how you too, can get involved. 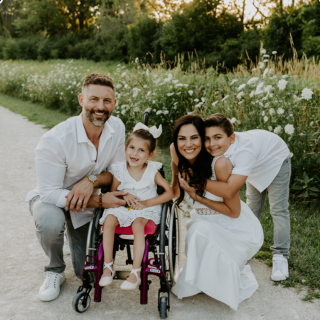 Nicole is passionate about her mission to inspire people to celebrate their triumphs, but also grow stronger from their trials. Together with her family, she hopes to not only be a voice, but a light for other families navigating through the storms of a child's diagnosis...and show that it's OK to have a Different Kind of Perfect. After her daughter received a Cerebral Palsy diagnosis, her mission has never been more important to her. As a Professional Speaker, Certified Life Coach, Writer, and Pageant Queen Advocate, Nicole uses her writing to show that we can acknowledge the storms we will undoubtedly will encounter in life, but more importantly, we can choose to celebrate the rainbows. Nicole is a wife and mother of two, Cristiano (7) and Ashlynn (4)